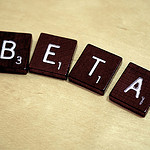 Google and Apple are both famous for their tech products and services, and constantly compete for market share. Their approach to product development is radically different from each other.

When Apple releases a product, it’s beautiful. Apple obsesses over design, thinks carefully about the user experience, and makes every effort to release something that’s “perfect”. Of course, some people also accuse Apple of deliberately holding back features so it can sell upgrades later. But, even taking this into account, what Apple does release is beautifully designed.

Google, on the other hand, often releases half-finished products that do the job, but are a bit rough around the edges. It makes no secret of this, and openly announces a “beta” release, which means it’s not so bad as to be completely unusable (that would be an “alpha” release, and that would only be released internally within Google), but is a bit rough around the edges.

An example is Google’s e-mail product, Gmail, which was released in beta in 2004. In fact, at the time of its release, it was available by invitation only, which was not a marketing stunt, but an acknowledgement that Google wanted it tested by a small group before making it available to everybody.

Which approach do you use with your people?

I don’t want to argue about the relative merits of the two approaches to product development because both Apple and Google are wildly successful. But I do want to ask you how you see your people. Do you think of them as complete, perfect packages, beautifully crafted and finished? Or do you see them as smart, talented and competent – but a bit rough around the edges?

If you look it from a spiritual viewpoint, then you might lean towards the former (“We are all perfect in every way!”). But from a practical leadership viewpoint, I suggest you take the latter approach. In other words, treat them as imperfect and beta.

In fact, think of them as beta forever.

This doesn’t mean you constantly focus on their flaws. On the contrary, it means you focus on their strengths, but acknowledge they have flaws. This is a much more respectful way to treat them, and it gives you the practical foundation to tap into those strengths.

So … Have you been holding your people, your team and your organisation back (not to mention yourself!) by waiting until your people have all their problems sorted out? If so, it’s time to treat them as beta releases. And they will be beta forever.

Open the Door To Greater Experience

As the coronavirus pandemic continues to disrupt our communities, leaders[...]

Reimagining The Workplace: A New Vision for the Future of Work

The Real Secret of the Future Workplace (P.S. It’s Not What You Think)

COVID-19 has forced many organisations - and employees - to[...]

A few weeks ago, the Australian Government announced changes to[...]