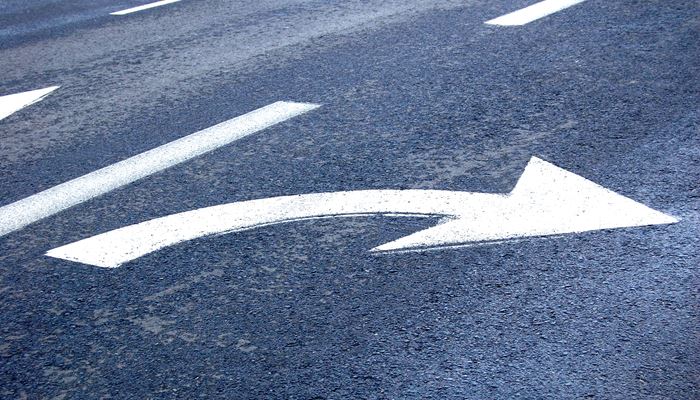 Many people think of disruption as a bolt from the blue that comes out of nowhere and shakes up an entire industry. But it doesn’t have to be that way. Sometimes you can “disrupt yourself” by making a small change in a slightly different direction.

This is not just doing the same thing better, faster, or cheaper than before. That can be useful, but it’s just an incremental change. We’re talking about a change in direction – or, as the management consultants call it – a “pivot”. Think “different”, not just “better”.

A pivot doesn’t have to be a major change. Sometimes it’s just one degree away from where you’re heading now. But that one tiny change in direction will take you into a completely new future.

Here are five examples of companies that successfully pivoted – and in different ways – to transform their business.

You might know Mark Zuckerberg started Facebook to connect university students. He started it at Harvard, and then gradually extended it to other American universities. The next step of his plan was to expand Facebook into high schools. But he shelved that plan, and instead opened it up to a much wider market: everybody. As a result, we have the Facebook of today: the biggest social media platform on the planet.

Thinking Ahead: What product or service could you offer to a different market? You don’t have to reach “everybody”, but a small shift to an adjacent market might create a profitable opportunity.

In 1891, William Wrigley Jr. was running a business selling soap (Wrigley’s Scouring Soap) and baking powder. As an incentive to customers, every time somebody bought a can of baking powder, he gave them two packages of chewing gum. Eventually, he realised customers wanted the chewing gum more than the baking powder, and he switched to that as the main product of the company.

Thinking Ahead: What side product do customers value enough that they might be willing to pay for it?

Instagram, the popular photo-sharing site with more than 800 million users, started out as a “meetup” service. Founder Kevin Systrom, a fan of Kentucky whiskeys, created an iPhone app called “Burbn” to help people “check in” at various locations, post photos of their location, and make plans to meet up later. But the app was too complicated, with a confusing “jumble of features”, as he described it. Systrom and his colleague Mike Krieger decided to pare down the app to focus on the most popular feature – photo sharing – and renamed it Instagram.

Thinking Ahead: What features of your products do customers rarely use? Can you strip them away to focus on the key features?

In the last decade, Air New Zealand has transformed itself from posting the largest corporate loss in New Zealand history to being consistently profitable, and is now one of the most highly-rated airlines in the world. Much of the credit goes to its visionary decision in 2016 to appoint a Chief Digital Officer (CDO), replacing the role of Chief Information Officer. This led to new initiatives around automation, data analytics, optimising manual processes, and a cultural shift of changing everything in the existing operation.

Thinking Ahead: Are you fully tapping into the power of digital, first to replace and enhance existing operations, and then to create new opportunities using AI, analytics, and Big Data?

Intel, famous for the “powered by Intel” processor chips in millions of devices, started with memory chips, which were used for storage rather than computing power. In 1985, facing fierce competition from Japanese companies, Intel was wrestling with the decision about whether to continue with “memory” or move fully into “processors”. Intel president Andy Grove broke the deadlock by asking his CEO, Gordon Moore, “If the board sacked us and brought in a new CEO, what would he do?” Moore instantly replied, “He would get us out of the memory chip market”. Grove said, “In that case, let’s walk out the door, come back in, and do it ourselves.”

Thinking Ahead: If somebody else took over your organisation, what would they do differently because they are not holding on to “baggage” from the past?

Which of these examples resonate most with you?

Sometimes it’s not easy to see possible pivots when you’re caught up in your existing operations and focussed on your current strategy. Take a step back and assess each of these five pivots, and what they might be able to do to your business.

Don’t start by asking how you make them happen, because you get bogged down in details. Instead of asking, “How?”, ask “What if?”

Forever After: How COVID-19 Has Changed Our World Forever - Online Presentation Tomorrow

When the pandemic crashed into our lives a year ago,[...]

Last year, during the worst of the pandemic, Oracle and[...]

In uncertainty and chaos, your people feel unsettled and insecure.[...]

Forever After: How COVID-19 Has Changed Our World Forever

Do Something That Matters

When Santiago Jaramillo, the CEO and co-founder of Saas software[...]