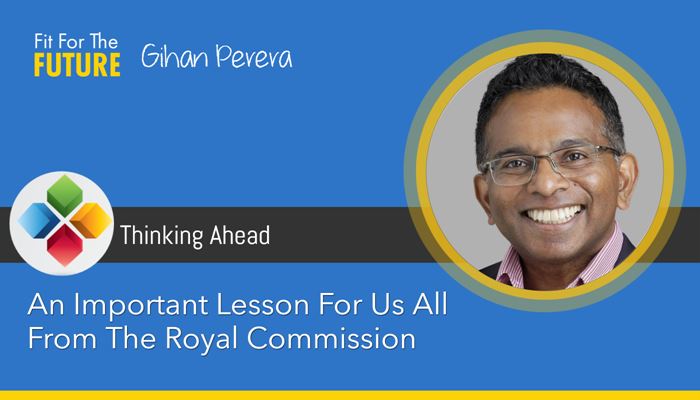 Last week, Kenneth Haynes, commissioner of Australia’s Royal Commission into Misconduct in the Banking, Superannuation and Financial Services Industry, handed in his final report, which included 76 recommendations for reform.

It’s a wide-ranging report, affecting many businesses offering financial services, and it has caused much debate and discussion over the last two weeks. I don’t want to discuss the report in detail here, but it’s worth looking at one aspect of it, because it’s a warning sign for every business in every industry.

Let’s talk about one group that claims to have been unwittingly caught in the crossfire: mortgage brokers.

One of the report’s recommendations is to change the way mortgage brokers charge fees. In a nutshell, instead of the current system of a broker charging the bank for bringing them the business, the Haynes report recommends they charge the customer instead. The idea is that this would eliminate any perceived conflict of interest, because brokers wouldn’t be influenced by the commissions they receive from the banks.

But many brokers claim this would destroy their business, because many customers simply wouldn’t pay a fee for this service (which they are currently getting for nothing).

I think they are probably right, and I have a lot of sympathy for their point of view. I have an excellent mortgage broker myself, and I know she has saved me thousands of dollars in fees and interest through her expertise. So I understand their point of view.

But the warning signs have been there for years.

This is one of the six kinds of disruption.

Broadly, there are six kinds of disruptive forces that could turn your business upside down:

This is an example of a Dominator.

A Royal Commission is an example of a Dominator because it affects everybody in an industry.

Sometimes the disruptions appears out of the blue, but more often the signs are there – if you’re willing to look for them.

For example, for the mortgage broking industry, it might look like these changes have come from nowhere as a result of the Royal Commission. But I wrote about precisely these changes in a blog post almost two years ago: What You Don’t Know WILL Hurt You – Disruption in the Mortgage Broking Industry. I wrote it because of another report released at the time – the Sedgwick Report – which recommended some of the very same changes the Royal Commission is recommending now.

Here’s an extract of what I wrote at the time:

“The dominators in the industry are the regulators and other government forces. They don’t compete directly with you, but they change the way you run your business – in ways that are generally outside your control …. The Sedgwick Report recommends changes to the way financial products are sold and offered – for example, replacing value-related commissions with a fee-for-service model … Last year, as part of the Financial System Inquiry (FSI), ASIC’s Review of Mortgage Broker Remuneration proposed other changes to the way brokers are remunerated – all in the name of increasing competition and improving consumer outcomes.”

As I said, the warning signs were there!

I’m not making any judgement here about whether the proposed changes are “fair”. As I said, I have a lot of sympathy for the broking industry’s point of view. But it doesn’t really matter what I think about it – these businesses probably will be disrupted.

It’s not easy for anybody to imagine major disruptive changes to their life – especially changes that fundamentally underpin their current business model. But it’s an important position to take – especially if you’re a leader in a fast-changing world.

Most importantly, look for the warning signs. It’s surprising how often they are there – if only you’re willing to look for them.

Here are three questions you can ask to help you adopt this mindset:

Be So Good They Can't Ignore You

In our fast-paced, always-on world, change is a part of[...]