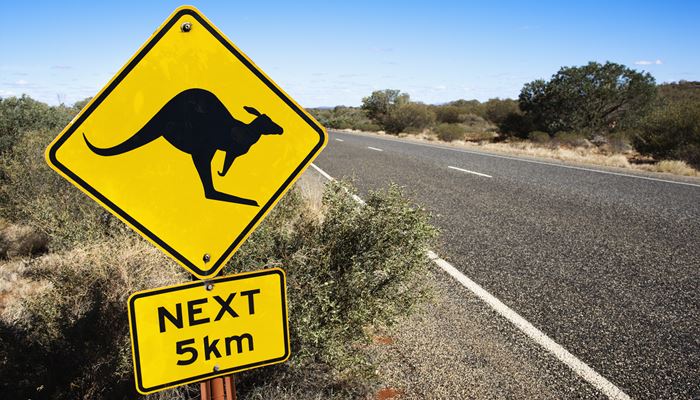 I remember a couple of years ago when I had my first dangerous close encounter with a kangaroo when driving on a country road. We were enjoying a quiet weekend away in Yallingup, in the beautiful South-West region of Australia, driving on a road near the beach, when a roo jumped out from bushes in front of us. Fortunately, it hopped across the road quickly, and we avoided an accident. But it was close, and I realised there was nothing we could have done if we had been crossing its path a few seconds earlier.

As a result of this close call, for the next couple of hours, I was very cautious when driving, examining every bush on the side of the road as if it might have a kangaroo lurking behind it. In fact, I became overly cautious, until I realised it was crazy to have that attitude forever. Yes, we need to be alert for roos, but we can’t drive forever with one foot hovering over the brake pedal.

The same applies to the way you view the future.

COVID-19 has created a lot of uncertainty. Australia has managed the pandemic better than most countries, but many things are still changing fast, often in ways we have never experienced before – such as low interest rates, the recession, border closures, and of course the continued risk of COVID-19.

If you’re leading a team, business, community, or family, you’ll be navigating your way through unknown future scenarios. But not all those scenarios deserve equal attention.

When you evaluate these scenarios, you can classify them into four groups: 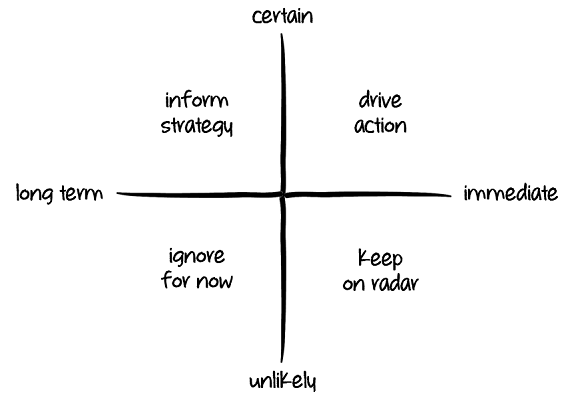 Then you can deal with them differently, depending on where they fit.

Long-term and unlikely: Ignore for now. 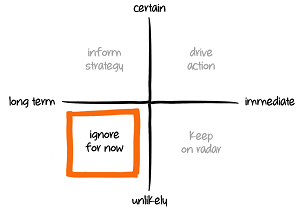 Some things are speculative, and even if they happened, won’t affect you in the short term. So it’s usually safe to ignore them for now.

For example, as much as we might get excited about Elon Musk planning to build a million-person colony on Mars, there are many obstacles to overcome, and it’s estimated to take 40-100 years. So most of us don’t have to take that into account in our business decisions.

Short-term and unlikely: Keep on radar. 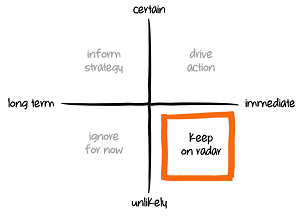 Some other things seem unlikely right now, but will have an immediate impact if they happen. It’s risky to ignore them, but we can just keep them on the radar and stay alert in case they suddenly appear on the horizon.

For example, another large-scale COVID-19 “wave” throughout Australia falls into this category. If we manage this well, we’ll continue to get occasional outbreaks, but we should be able to contain them. 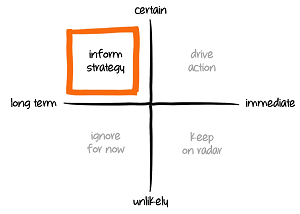 On the other hand, some scenarios are inevitable, but might not happen for a while. As a leader, these fall under your responsibility, and they should inform your strategic direction, even if you don’t make immediate plans for them.

For example, autonomous vehicles (self-driving cars) will replace drivers, just as surely and completely as cars replaced the horse and buggy. But there are still many hurdles to overcome – mainly because driving is so ingrained in society. So, it will be years before fully autonomous vehicles become mainstream, but, as a leader, you should definitely incorporate them into your strategic thinking now. 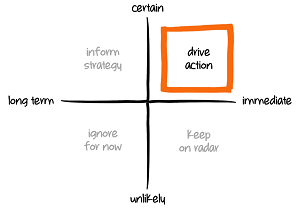 Finally, you will face some scenarios that are both highly likely (if not already happening) and with short-term impact. Obviously, you need to plan for them and act immediately.

Whatever your industry, I’m sure you can find many examples: new regulations, actions from competitors, new technology, global competition, and more. In fact, these are usually the easiest scenarios to identify.

Which scenarios are YOU planning for?

If you have never done this kind of scenario planning before, I highly recommend it. I also recommend you involve your team members, because they bring different perspectives to the conversation.

When I work with leaders and their teams to help them with their decision-making, I work through this exercise with them. In my experience, I see three common traps and mistakes:

Do this scenario planning exercise now! It’s not just useful – it’s part of your responsibility as a leader.

If you would like my help, please get in touch.

Are You Ready To Lead In Uncertainty?

The things you don’t know WILL hurt you!

Change is a part of life - especially after the[...]

If you’re picking apples from a tree, how would you[...]