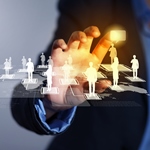 The workplace has changed: in space, in time, and even in the people who do the work.

You could use the phone to reach people remotely, but that was either quick (for getting a quick answer), temporary (colleague away from the office), or to arrange a meeting.

No question: the office was the best option. But it came at a cost – many costs, in fact. For example:

Most of all, it just wasn’t tapping into the potential offered by the Internet and Cloud.

Distributed teams and the virtual workplace reduced some of the friction of the physical office, and improved productivity.

But, although it fixes the problem of when and where people work, it doesn’t address the issue of who does the work.

What are the chances that the people you employed – possibly many years ago – just happen to be the best people in the world for your key project right now? In the past, it wasn’t practical to use anybody else, but now you (literally!) have the whole world at your fingertips.

The workforce of the future is fluid

Your future workforce is not defined by its workplace. A team comes together – from anywhere in the world – for a task, does the work, and then disperses. Sometimes the entire team disbands, sometimes the core remains. But the key is that you’re getting the best people for the job.

Some organisations are better than others in adapting to this future. Most aren’t ready for it, and some will actively resist it (and may never get there). But if you really want to prepare your organisation for the fast-changing world of work, at least consider how you can create a more fluid work environment.

Get ready for the fluid workforce

Even if you aren’t fully ready to embrace the idea of a fluid workforce, here are four key questions to position yourself for it in the future:

Although I’ve framed these as simple Yes/No questions, the answers generally won’t be as simple. Rate your teams on a scale of 0 to 10 for each of these four questions, and that will give you a good idea of how well you’ll be ready to build the fluid workforce of the future.