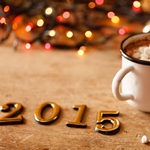 It’s December already, and 2014 is rapidly coming to an end. As you reflect on the year that’s gone by, do you see it as a year of great success or a year of missed opportunities? Or some of both?

One of my mentors, Paul Counsel, says that most people don’t live, say, 10 years; rather, they just live the same year 10 times.

If you want to do things differently, plan for success.

Of course, this is the time of year when many people do their goal setting and planning. But it’s relevant for any time of year.

1. Choose a direction or theme for your year.

In your professional life as a leader, is this the year for collaboration? Or embracing innovation? Or social media? Or positioning? Or creating authority? Or consolidation? Or leverage? Or new opportunities?

What about your personal life? Is this a year for better relationships? Or health? Or building wealth? Or rest and renewal? Or personal growth?

Your theme isn’t a goal. Rather, it sets the direction for your life over the next 12 months, and it will influence the goals you choose.

You only have one theme for the year (or two at most, if you choose different themes for your personal and professional life).

Instead of setting 12-month goals, create 90-day goals (that is, 3 months rather than 12). And you might like to think of them as projects rather than goals.

The nice thing about a 90-day project is that you can plan it with a reasonable amount of confidence. It’s long enough to do something significant, but short enough that the world probably won’t change too much around you. There might be the occasional change that means you have to adjust your plan. But you probably won’t have to throw it out altogether.

You can then break your 3-month plan down into weeks – about 12 of them – and then create an action plan each week. I learned this from the late Steven Covey, who said too many people create an action plan for the day, but never achieve it because of interruptions and distractions. And he said that in the 1990s, and now of course we have so many other things to interrupt or distract us!

On the other hand, if you plan for the week, you have a bit of flexibility when unexpected things happen on a particular day.

Then, each day, decide on the top 3 things you want to achieve that day. My friend Neen James, who is a productivity expert, recommends writing them on a Post-It note and carrying it around with you.

So that’s the system!

In a nutshell: Choose a 12-month theme, create a series of 90-day projects, set weekly action plans, and identify a daily top-3 list. 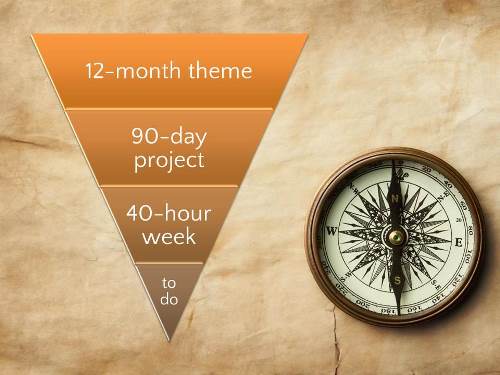