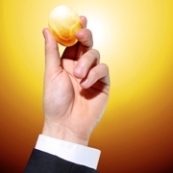 Every month, Kelly Mooney, CEO of the digital marketing firm Resource Ammirati, has a strategy meeting with one of her team members, Matthew Santone, to discuss the latest trends and developments in brands, consumers, and technology. A CEO having a strategy meeting? No big deal, huh? Except for one thing: Santone is many years her junior and many levels below her on the organisational chart. Despite these differences – or rather, because of them – Mooney eagerly looks forward to these meetings. She says:

“Each month, Matthew arrives with approximately 20 new things that should be on my radar – cool campaigns, emerging trends and new innovations within and beyond our industry. We sit shoulder-to-shoulder as he walks me through what it is, why it made his list, what I should know about it. We discuss potential applications to our clients and our business. Each session is incredibly inspiring, unlocking new ideas. One of my greatest thrills is watching his brain churn with ‘what if’ scenarios.”

Kelly Mooney is one of the enlightened leaders using “reverse mentoring”, where younger, more junior, people in an organisation provide the mentoring for older, more senior, staff.

This is just one example of looking at mentoring in a different way. It no longer needs to be the senior people mentoring their juniors. Here are six other options.

If you have ever asked a ten-year-old to show you how to do something on your iPad (as I do regularly with my niece), you’ve seen reverse mentoring in action. It’s what Kelly Mooney does in the example above, and it’s becoming more common. In brief, the younger, more junior, people in an organisation provide the mentoring for older, more senior, staff – particularly in areas such as technology, social media, innovation, trends, consumer behaviour, recruitment, and talent management. Reverse mentoring shortens the learning curve, gives employees new opportunities, enhances morale, boosts productivity, and creates a closer team.

When everybody – even the newest graduates or youngest team members – brings valuable skills, experience and insight to the organisation, they can help each other through peer mentoring – often called a mastermind group. You bring peers together regularly (they can even include people outside your team) to share ideas, questions, answers, and insights with each other.

Another form of peer mentoring happens across organisations and industries, where people with different skills come together as a group. For example, an accountant, lawyer, marketing expert, IT expert and financial planner might form a group to help each other and act as an informal “board of directors” for each other. Their diversity helps to broaden the outlook for everybody, and they can also offer informal advice within their respective areas of expertise.

Another form of peer mentoring is “buddying”, where two peers with similar goals help each other. You can even use this in addition to other mentoring. For example, if two of your team members are being mentored (separately), you could invite them to be “buddies” for each other, so they keep each other accountable and learn from each other’s experience as well as their own.

An increasingly common form of mentoring is the idea of you mentoring your own team members. This was once considered inappropriate because of the potential clash between the two roles. However, with much less emphasis on hierarchy now, there’s no reason for you not to mentor your team members; and in fact, there are strong arguments for it.

Mentoring can be for everybody, but you might be able to tap into existing mentoring programs for specific groups, such as “Rising Stars” (employees earmarked for fast-track development), women (many professional organisations have specific mentoring programs for their female members), special appointments (for example, employees looking to relocate or work from home), and minorities and other special groups.

Does this give you new ideas for mentoring in your organisation?

Until now, you might only have thought of mentoring in the stereotypical way – that is, the wise, grey-haired senior executive having lunch meetings with an up-and-coming younger employee. There’s nothing wrong with that model, and it’s probably still the most common form of mentoring in organisations. But it’s not the only kind of mentoring available – and you might now have new ideas for mentoring for yourself, your team, and your organisation.