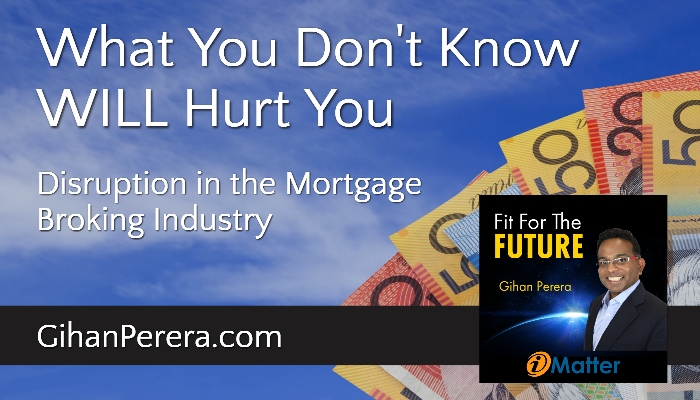 The release this week of the Sedgwick Report brings yet another major change to this fast-changing industry. If you’re a broker, you might despair because it places even tighter controls over your business, while at the same time you’re facing competition from other outside forces (such as online broking offers like uno).

If you think things are changing faster than ever before, you’re right! As one indication, the Financial Services Disruption Index, which measures changes in the small business lending sector, shows a jump in disruptive forces, led by increasing client awareness of alternatives to the traditional borrowing channels.

It’s easy to say your business – and the industry – is facing disruption, but what does that really mean? More importantly, what can you do about it?

Broadly, there are six kinds of disruptive forces that could turn your business upside down:

They don’t all affect you equally, but it pays to be aware of all of them, so you can adapt to them, embrace them, and perhaps even lead the change in the industry.

Let’s take a quick look at these disruptive forces – and examine how they might affect your business.

Who are you currently fighting head to head for market share? These are the traditional “disruptors”– the existing competitors in your industry.

It’s easy to get distracted by the big changes from regulators and fintech startups, but don’t overlook your direct competitors. As the MFAA warned recently, a growing number of brokers and a slowdown in new loans mean it’s a crowded marketplace for brokers, and the broker market might be reaching saturation point.

What happens to a corner store when Coles and Woolies move in? These are the dominators – the big businesses with the big budgets and deep pockets. When they move in to a market, they don’t just threaten you – they threaten all your competitors as well.

For example, in the USA, Google is moving in to the mortgage broking market, teaming up with online real estate database Zillow to sell home loans. Google is using one of its key strategic assets – the ability to store, sort and search vast amounts of information – to help borrowers compare home loans, and then connect with lenders.

Closer to home, the dominators in the industry are the regulators and other government forces. They don’t compete directly with you, but they change the way you run your business – in ways that are generally outside your control.

As noted earlier, the Sedgwick Report recommends changes to the way financial products are sold and offered – for example, replacing value-related commissions with a fee-for-service model. Already, the Big Four banks have promised to implement this recommendation (and all others).

It’s not the first – and won’t be the last – change of its kind. For example, last year, as part of the Financial System Inquiry (FSI), ASIC’s Review of Mortgage Broker Remuneration proposed other changes to the way brokers are remunerated – all in the name of increasing competition and improving consumer outcomes.

At the other end of the scale are the start-ups – the new players in your industry. They don’t have your experience, resources, and existing market share, but they also don’t have your baggage and sunk costs, so they can operate with a lean, nimble, and agile approach.

Accenture reports that one-quarter of Australian executives expect the greatest risk of disruption from this kind of competition.

Mortgage brokers – like any businesses with the words “agent” or “broker” in their name – are particularly vulnerable. Many have relied in the past on being gatekeepers to valuable information about lenders, but that information is now more readily available, so it’s easy for borrowers – and lenders – to bypass the broker.

That’s why startup platforms like uno – which bypasses the traditional mortgage broker to connect borrowers to lenders – can disrupt the industry. It’s also why big banks are so willing to invest in them (Westpac alone has invested $16.5 million in uno).

Keep in mind that your customers and clients are rapidly adopting new technology and business practices – which leads to higher expectations. When people can book a flight, call up an Uber, order restaurant food delivery, and more – all from a few clicks on their smartphone – why should they have to wait 29 hours for a lender to process a loan?

It’s not always easy to predict the start-ups in your industry, because you don’t know from where they will spring up. However, you can prepare by acting more like a start-up yourself, always asking the question, “If we were starting from scratch, is this the way we would do it?”

What if a competitor doesn’t play by the rules? These are the upstarts – competitors from outside your current space who aren’t bound by the same rules and regulations as everybody else.

Globally, KPMG reports that two-thirds of CEOs are concerned by new entrants disrupting their business models.

Upstarts can make a dent in even highly-regulated industries (as Uber and Airbnb have shown). In fact, in mortgage broking, it doesn’t even mean breaking the rules. ASIC’s Review of Mortgage Broker Remuneration report points out that mortgage referrers such as real estate agents and developers earn almost as much in commission as brokers, despite doing much less work.

As difficult as it can be to compete against an upstart, it’s even more difficult when you’re blindsided by a random – somebody from outside your industry who disrupts your business without even trying to compete.

For example, the Turnbull Government’s recent announcement to abolish the 457 skilled worker visa will affect some in the mortgage broker industry. It creates barriers for bringing expertise and skills into Australia, but is powerless to block the passport-less, visa-less, connected online world. That gives you an advantage if you’re already outsourcing, offshoring, crowdsourcing, or using other similar ways to engage talent from everywhere. If you’re not, there’s a danger you will fall even further behind.

Finally, how will you cope with the terminators – the businesses that don’t directly compete with you, but make your industry obsolete?

The mortgage broking industry relies on home loans, which in turn piggyback on the need for property purchases. But what if this need changes?

Of course, housing affordability is a hot topic now, but that’s just one pressure point on the property market. Other emerging technologies and trends could also affect it – for example:

Some of these trends will take time to take hold, let alone become mainstream. But they should still figure in the strategic planning for your future.

The first three forces – competitors, dominators, and even start-ups – might already factor in to your strategic planning, because they are more visible and “in your face”. But it’s the other three – upstarts, randoms, and terminators – that could cause more damage, because they are hidden and have greater potential impact.

Don’t ignore any of them! Smart leaders and business owners use all six in their strategic planning.

It’s tempting to put this aside because you’re too busy coping with the deluge of changes right now. But that’s risky, because you’ll never have the luxury of time. Address them now – and plan for them in your future.

To quote Ernest Hemingway from his novel The Sun Also Rises:

“How did you go bankrupt?” Bill asked.