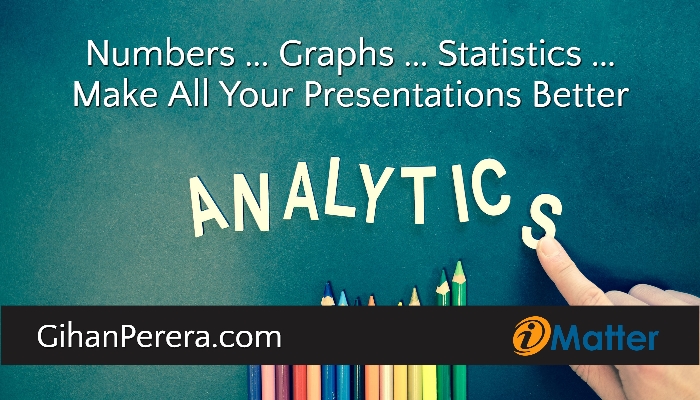 I speak at a lot of conferences, so I see a lot of presentations from other speakers. Those who aren’t professional speakers often make the mistake of cluttering up their presentations with too much data – such as statistics, graphs, and other numbers. Of course, numbers are important, and they can be essential tools to support your message. But you don’t need to present them in a boring way (as most presenters do). The problem is not the facts themselves; it’s in how you present them.

Many presenters who use data in a presentation make one of two mistakes: it’s either too little or too much.

Fortunately, it doesn’t take much to fix either problem.

Not enough data? Make it meaningful.

If you’re worried about overwhelming your audience with data, it’s tempting to leave it out altogether. But that’s not the best option. Instead, consider how to relate your data – especially numbers and statistics – to something the audience understands.

For example, Jamie Oliver starts his 18-minute TED Talk with a fact about healthy eating:

“Sadly, in the next 18 minutes when I do our chat, four Americans that are alive will be dead through the food that they eat.”

The late Hans Rosling, who was Swedish professor of global health, became world-famous for presenting data in an interesting way. For example, in one of his presentations, instead of saying, “The survey participants performed worse than chance”, he says:

“So I went to the zoo and I asked the chimps. You were beaten by the chimps.”

You can do the same with any important fact, number or statistic in your presentation. Look for ways to relate that fact to something the audience understands – like this:

Too much data? Reduce it.

The second mistake is providing too much information – in other words, cluttering up the data so the important point doesn’t shine through. To avoid this mistake, look at your main piece of data and eliminate anything around it that could dilute it.

Here are some tips:

Are you playing the numbers game right?

It doesn’t take much to be “good with numbers” when you present, and your audience will thank you for it!