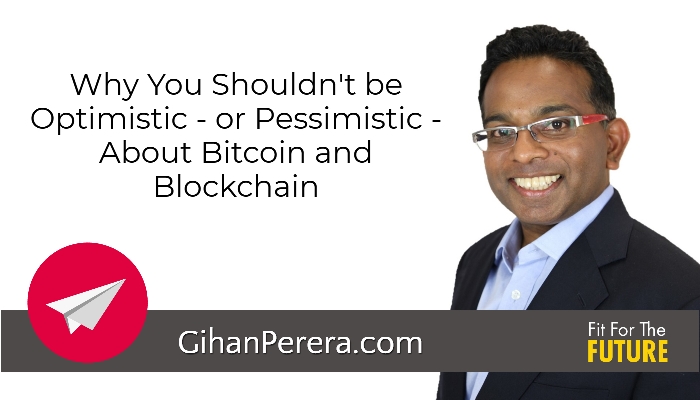 As a futurist, I see a lot of news about Bitcoin and blockchain (the technology underlying Bitcoin), and many people ask me for my opinion about them. Are they a bubble? Do they have a future? Will blockchain transform the banking / healthcare / baby food industry?

Some people are disappointed with my answer: “Sorry, it’s too early to say”. They think that, as a futurist, I should be able to make some sort of prediction, or at least have an informed opinion about it.

The truth is, I do have an informed opinion about it, and it’s this: It’s too early to say.

I’ll explain why, and in the process I’ll share a really valuable tool that futurists use to make judgements about the future.

Way back at the end of the last century, when the Web was new, a whole bunch of “dot-com” companies were launched with few assets and almost no revenue, but with some vague potential for future expansion. Many people invested in them on this potential, and they had huge valuations … until they crashed. It turned out they were full of hype and nothing else, and eventually the market realised it as well.

At the time, I was running a small Web design company (one of the first in Australia), and I remember people asking me about the future of the Web:

At the time, I could put my hand on my heart and say that Yes, the Internet did have a future, and Yes, it was worth building a Web site. Sure, I had a vested interest in saying that, but I also had something else: plenty of examples of highly profitable Web sites. Some of my first Web site clients who invested $5,000 with us were getting 5x, 10x, even 100x returns on their investment. And in cash, not in future potential.

Those examples gave me confidence that the Web was here to stay. Despite the flawed business models of those other dot-com companies that eventually crashed, there were plenty of examples of solid Web sites that were making money – for regular business owners, with real businesses, offering real products and services.

So what does this have to do with Bitcoin and blockchain?

There’s a lot of hype about Bitcoin, but it’s been around for almost 10 years now (yes, since 2008!), and still hasn’t had much impact on the world. Not in a real sense, anyway. Sure, some people are making money on it, but that’s based on the speculation about its future potential (like buying shares in a dot-com company based on future potential, and then selling them to somebody else who has a higher opinion of their future potential). But Bitcoin as a currency hasn’t exactly set the world on fire.

Blockchain is even worse. You can read countless articles about blockchain transforming law enforcement, ride hailing, healthcare, banking, voting, education, music, real estate, insurance, supply chain management, and pretty much any other industry. But look closer and you’ll find most of these articles use words like “possible”, “potential”, and “could”. There’s nothing wrong with talking about future potential (I do it all the time!), but if that’s all you see, be sceptical.

And don’t be fooled when you see people claiming they are already using blockchain technology. They’re probably not. This one is a bit harder to debunk, but pretty much every example I’ve seen is just a different name for existing database technology. I know, because it’s the same database technology I learned as an undergraduate Computer Science student in the 1990s. You think I’m joking, but I’m not. It’s just that it’s easier to get the attention of the C-suite if you say “permissioned blockchain” than “1990s database”.

This might sound like I’m highly critical of Bitcoin and blockchain, but that’s not true. Don’t get me wrong. I think the Bitcoin/blockchain technology is pure genius, and has huge potential. But potential alone is not enough.

So am I optimistic or pessimistic?

Neither! It’s easy to have an opinion, but there’s just not enough evidence to make an informed opinion.

Think about it this way …

Suppose I gave you a bag with 99 black balls and 1 white ball, and asked you to pick one at random. Would you be optimistic about picking a black? Yep.

What if it was 99 white balls and 1 black ball? Now you would be pessimistic about picking black, right?

But what if I didn’t tell you anything about what’s in the bag? Would you be optimistic or pessimistic about picking a black ball? Well … neither. It would be dumb to speculate, because you just don’t have enough information. If you bet money on it, that would just be a pure gamble.

That’s where I think we are now with Bitcoin and blockchain. Lots of potential, but that’s all right now.

I’m not giving you financial advice here. Some people invest in potential alone, some don’t. That’s up to you, and if you want to invest, talk to a qualified financial adviser and make your decision based on that advice.

Because this isn’t about Bitcoin or blockchain.

I’ve used Bitcoin and blockchain as examples, but I don’t want you to miss the more general principle.

Futurists don’t don’t make judgements on potential alone. We consider a number of other factors, and one of the first is to find real, practical examples of something in practice.

If you want to think like a futurist, I suggest you do the same.

Despite what I’ve said about Bitcoin and blockchain, I’m not saying you should remain ignorant about them! They are big news right now, so it’s worth understanding the basics about them. I covered this in my recent webinar “Bitcoin – What’s the Big Deal?”, which you can watch here: