As we’re starting a new year and looking ahead to yet another of our annual round-trip voyages around the sun, there’s no doubt we will still face a lot of uncertainty during the next few months (years!). A lot has changed in the last two years, and we should expect a lot more to change in the coming year.

So what can you do to remain relevant for your customers? And employees and other stakeholders, of course, but let’s start with customers.

Whatever else you do, there’s one crucial thing you must get right.

I’ll explain this with a story.

When Kenneth Shinozuka was six, he saw a family friend injured when he fell in the bathroom while visiting Kenneth’s family. That incident started young Kenneth thinking about how to prevent such falls in the future. As a six-year-old, he didn’t have the resources to solve the problem (although he did have the idea of embedding a motion detection system in bathroom tiles), but the inspiration stayed with him.

Later, at the ripe old age of 15, Kenneth invented a smart device to prevent falls: a pair of socks that alerts a caregiver when somebody with Alzheimer’s disease tries to get out of bed.

That year, he was one of fifteen finalists at Google’s Global Science Fair, and he also won the $50,000 Scientific American Science in Action Award.

Kenneth’s idea for his invention didn’t just come out of nowhere. Rather, he was inspired by trying to solve a real problem in his family. His grandfather had Alzheimer’s disease, and his condition was gradually deteriorating. His primary caregiver, Kenneth’s aunt, was struggling to cope, because she had to remain alert every night in case her father stepped out of bed and wandered around the house.

Faced with this problem in his family, Kenneth searched for a solution but couldn’t find one. So, he invented it. Instead of embedding motion detection in the floor tiles (the idea he had had as a six-year-old), he embedded a pressure sensor in a pair of socks. The pressure of a foot landing on the floor would trigger the sensor, which would wirelessly send an audible alert to his aunt’s smartphone.

There was still a lot of work for Kenneth to get his idea from a concept into a workable solution – including creating the sensor, designing the circuit, and building a smartphone app. But he persisted, and eventually created the device that lets his aunt sleep more soundly at night.

Kenneth’s device is now commercially available as SafeWander, where anybody in a similar situation can buy it for $200. But Kenneth didn’t set out to create a business product – he was simply trying to solve a problem in his family.

Solve their problems. Understand the problems you’re really solving for your customers.

‘If you’re not serving the customer, you’d better be serving someone who is.’

Many businesses start with a strong customer focus, and obsess about how they can solve their customers’ problems or help them achieve their goals. But over time, as the business grows and needs to support itself, that obsession fades, as other “essential” work takes its place.

For example, imagine a budding entrepreneur of primary school age selling lemonade on a hot day, from the footpath outside her home, to people walking by. All she wants to do is help solve their problem (thirst).

If her little business grows into a large organisation, she will spend more and more time solving other people’s problems: the local council, the ATO, other government agencies, staff members, suppliers, shareholders, media, and community groups.

The thirsty customer – who was once her top priority – soon falls down the pecking order. She spends all her time and energy serving other people to keep the business running, forgetting that its original purpose was to solve a customer’s problem. 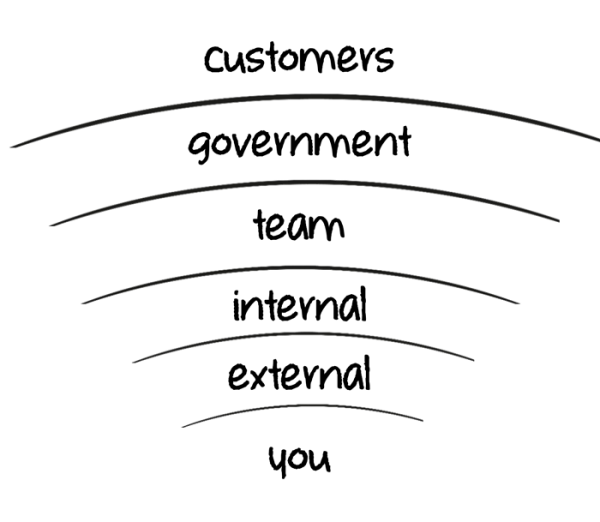 It’s not inherently wrong to solve other people’s problems in the organisation, especially if you’re in a leadership role. It only becomes a problem when that doesn’t ultimately help a customer solve their problem as well.

Too many businesses fall in love with their own products, services, systems, processes, and solutions. They forget about the problems they solve for their customers and clients. They find a cure for which there’s no known disease.

That’s why you should regularly take stock and ask the question:

‘What customer problem are we solving here?’

Be sure you identify their real problem, and don’t just offer a convenient solution to an easier problem. For example, if you offer a loyalty discount to regular customers, that might represent a real benefit to those customers (and helps them save money, which does solve a real problem). But if you force them to bring their membership card to gain the discount, that doesn’t solve their problem (it solves yours).

As a simple (but possibly sobering) exercise, look at all your team’s activity in the past week, and count how many hours you spent on work that solved real customer problems. If you don’t deal directly with customers, you can include time helping other people who do, but be sure you only include activities that help them solve customer problems. Then ruthlessly work at eliminating all this other “dead time’.

If you don’t solve their problems, they will find somebody else who will!

As you’re taking stock for 2022, ask these questions for yourself and your team:

I was recently speaking at a conference for the top[...]