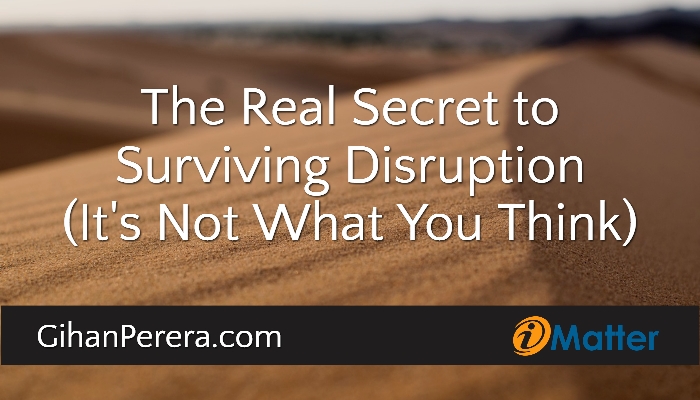 But at what point did it stop being “a heap of sand”?

Clearly, it ended up not being a heap of sand. But there’s no definite point where you can say that taking this grain of sand changed it from “heap” to “not heap”.

This is exactly what happens with disruption in business.

Most disruption doesn’t happen all at once. It happens piece by piece, step by step, grain by grain.

That’s what happens with most established busineses that get “disrupted”. Looking back, it might seem like a major event shook up the industry – such as a new technology, or a giant like Google entering the market, or new government regulations.

But that’s only the view with hindsight. It usually happens in much smaller steps.

At first, you’re facing new competitors in the market, and you all fight for market share.
Then a regulator might step in and chip away at some competitive advantage.
Then a smart startup builds an app to grab some of your customers.
Then overseas competitors who don’t have to play by the rules step in.
Then somebody from another industry sideswipes your industry and takes your customers.
Then eventually your entire industry gets wiped out by some new technology.

But it didn’t start that way!

Most businesses ignore the little grains of sand along the way. Don’t!