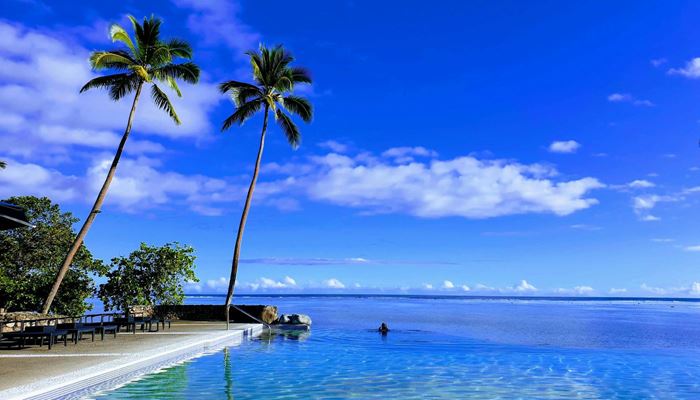 Last week, I was in Fiji speaking at the Fiji Institute of Accountants annual conference. Their theme was “Prioritising Humanity”, and I was speaking in the Innovation section of the event. An important part of my role was to explain global megatrends, describe Fiji’s position in the world, and highlight opportunities for Fijians to thrive through innovation and disruption.

If you know something about Fiji, you might think this is a hard sell. The country is a tiny island group in the South Pacific, has a population of less than a million, and its economy has been driven by agriculture and tourism. Fiji is still considered a developing nation, and by many measures is a long way behind many other countries.

But that would be a narrow-minded view, and it’s that kind of view that toppled other giants. Remember, at one time Uber and Airbnb were just tiny players in their markets – so small the incumbents didn’t even think of them as competitors. By the time they realised these startups had evolved from insignificant midgets to minor annoyances to major players that disrupted their businesses, it was too late.

In my keynote presentation, “Disruption By Design”, I explained that innovation and disruption are exactly the same thing. They are both about change: Disruption is when change happens to you, innovation is when you create change yourself.

Of course, we have always experienced change, but the pace of change itself is increasing – and that has flipped the power dynamic. It’s exactly why large, established industries are easy prey for small, agile disruptors.

I explained this briefly to a journalist from the Fiji Sun, who interviewed me after my presentation about opportunities for Fijians. You can read her write-up here – click the image to see the details: 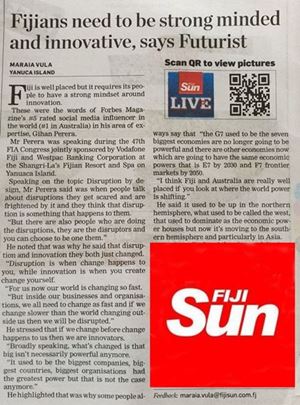 Of course, the interview focussed on Fiji, but I made three key points that apply across the board – regardless of your location, organisation, or role.

In the past, being the biggest gave you the advantage of strength, stability, resilience, and power. That’s no longer the case. Being the biggest can now be a disadvantage, and being small gives you the ability to be flexible, agile, and nimble – the skills you need most in a fast-changing world.

That’s why a small country like Fiji – with fewer commercial resources than larger economies – has an opportunity to make its mark in the world. It doesn’t have those resources, but it also isn’t saddled with the baggage those resources bring. The same could apply to your organisation.

2. Change before change happens to you.

Of course we’re living in a fast-changing world. It’s not going to slow down, so you have only two choices: Proactively lead the change or reactively wait for the change to strike you. Those who do the first are the innovators, and the others are the disrupted.

As Jack Welch, the former CEO of General Electric, said:

The first two points level the playing field: Everybody can change fast, and you’re no longer jostled out of the market by the biggest players. But, by themselves, they don’t automatically give you success. Rather, they give you the opportunity for success.