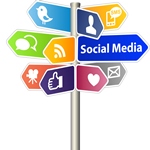 In almost any discussion about productivity in the workplace, the question about allowing or blocking social media invariably arises. It happened in a recent webinar I was running about employee engagement, when somebody asked a question along these lines:

“How do you keep employees focused on work requirements rather than social media? If we allow our employees to use social media, they would just waste time.”

This is a legitimate concern for many leaders, and the default solution is usually to simply block social media at work. As a solution, it’s fast, easy, and seems to solve the problem. Unfortunately, it probably isn’t the best solution.

Here are seven reasons you should let team members use social media at work.

It’s unreasonable to expect people to be 100% productive 100% of the time. They aren’t now, and they never were. Before we had social media, we had coffee breaks, idle chatting in the hallways and lunch room, and “smokos” (stepping outside for a cigarette and chat). And when people were asked to work longer hours, they also used more of that time for personal tasks – like personal phone calls, paying bills, and taking long lunches.

Social media breaks are the modern equivalent, and just because you can block them doesn’t mean you should.

In fact, there is an increasing amount of research suggesting that people are more productive when they work in focussed “sprints” followed by short breaks. For example, the popular Pomodoro Technique suggests a 25-minute sprint followed by a 5-minute break; another technique recommends 52 minutes of work followed by a 17-minute break. Whatever intervals you choose, the point is that regular breaks improve productivity rather than harm it.

2. They Are Probably Not as Unproductive As You Think

I don’t want to pass judgment on what’s right and wrong in these situations, but I do want to make the point that your opinion is probably based on your own experience. In particular, when it comes to productivity, just because you have wasted time on social media doesn’t mean everybody does. In fact, the most proficient users naturally learn how to use it efficiently. They can pull out their phone, quickly check Facebook, shoot out a few Likes and responses, and then get back to work, having had their social media “fix” in a minute or two.

So yes, they might be wasting some time. And yes, it does take time to re-focus on a task after even a small interruption. But the problem is probably not as bad as you think.

3. You Can’t Control Them Forever

You might think you can monitor and control your team members’ productivity in the office, but what happens at other times? The modern workplace has changed, and many people want greater flexibility – for example, working from home, part-time work, working while on business trips, working in distributed teams, and so on. If you trust your team members to do the right thing in these situations – when they’re not under your watchful eyes – why would you be more controlling and dictatorial for those in the office?

4. They are Mature, Responsible Adults

Following on from the previous point, this is not just about social media, but about the way you treat your team in general. Your team members are smart, talented, motivated, mature, responsible adults. Don’t treat them like disobedient children!

Blocking social media just because it could waste time is foolish, especially when you consider all the other risks you don’t block. The time they waste on social media is insignificant compared to the cost of, say, negotiating poorly on a business deal, losing a sale because of a bad attitude, carelessly leaking confidential information, or making a rude comment to a customer. If you trust them enough not to make these sort of mistakes, you should definitely trust them to manage their own productivity and energy.

5. They Will Return the Favour

Another change in the modern workplace is when work gets done. The work day no longer starts when you walk into the office in the morning, and it no longer ends when you walk out at the end of the day. Increasingly, your work life creeeps more into your personal life, and vice versa.

If you try to block your team members from doing anything personal during work time, they will feel resentful and disinclined to be flexible for you. On the other hand, if you trust them to be responsible at all times, they might “waste” some work time on social media, but are far more likely to return the favour – for example, by checking e-mail at home, doing extra work on a business trip, reading material on the bus or train, and so on.

6. You Want them to be Your Social Media Ambassadors

Even if they don’t have an official social media role in your organisation (such as marketing or online customer service), you still want your team members to be online ambassadors for your organisation. They are now just as likely to speak about you on Facebook as they are at a family party, and the quality of those conversations is just as important. You want them to feel good, not resentful, about social media; and this attitude will come through in their online interactions.

For example, using the principle that birds of a feather flock together, your best team members probably already know your best future team members – and they are likely to be connected to each other on social media. You can fast-track the recruitment process if your team members recommend you to their friends, but that won’t happen if they feel resentful about your rules about social media at work.

7. Whose Fault Is It Anyway?

Finally, if you think team members are wasting time on social media, turn the spotlight back on yourself and ask why. Is the work (and work environment) really so uninviting, uninspirational and unmotivating that they can’t find any better use for their time than watching cat videos?

Of course, there are times when work is difficult, tedious and boring. But that should be the exception, not the norm. Even if you can’t change the work itself, look for ways to motivate your team by providing more context (explain how their work fits into the big picture, and makes a more meaningful contribution) or improving the work environment.