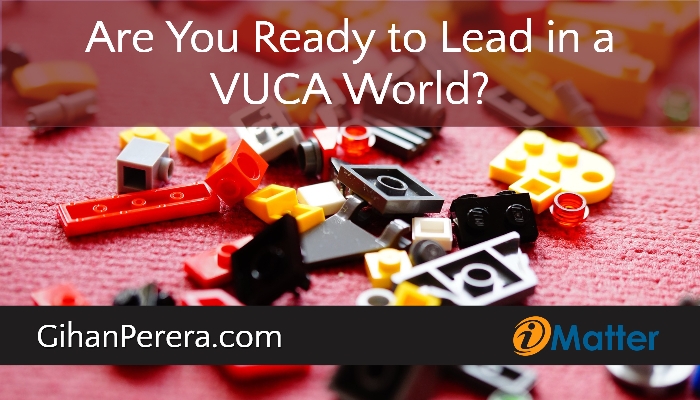 I heard somebody say recently that you don’t know what real pain is until you step on a piece of Lego on the floor when walking barefoot from your bedroom to the bathroom in the middle of the night.

OK, it’s a First World problem, I know! But anybody who has had that experience can sympathise with her.

For many business owners and leaders, that’s not a bad analogy for trying to lead an organisation in this fast-changing world.

At least, with the Lego on the floor, you might have known it was there, you had the option of turning on the light, and you could step carefully around it.

But what if you didn’t have any light, you were walking on slippery polished floorboards, and the Lego pieces keep randomly moving around the floor?

In the business world, they don’t call it Lego – that would be so childish!

They call it VUCA.

You know all this, of course, because you might be living it. But knowing it is only the first step.

How do you lead in this brittle, slippery, messy and fuzzy world?

The big mistake most leaders make is to try to simplify the world. But that doesn’t work.

You can clear the Lego from the floor today, but tonight it will be there again. And tomorrow. And the day after. And you can’t wait until the kids outgrow Lego before making another midnight trip from your bedroom!

Don’t try to simplify the world around you – that’s a battle you can’t win.

Instead, aim for clarity – so you can operate in a world that isn’t simple anymore.

This means accepting the brittle, slippery, messy and fuzzy world – and figuring out how to lead in it.

Here are a few differences between leaders who try to achieve simplicity and those who aim for clarity: 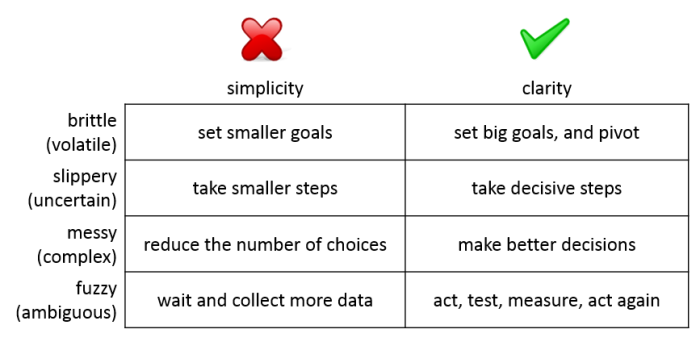 I’ve only given you some broad principles here, but I hope they are enough to get you thinking about your own leadership style.

You might be doing some of these things already – if so, great! If not, it might mean learning some new skills – and perhaps unlearning some old skills that worked for you in the past.

Welcome to the future!