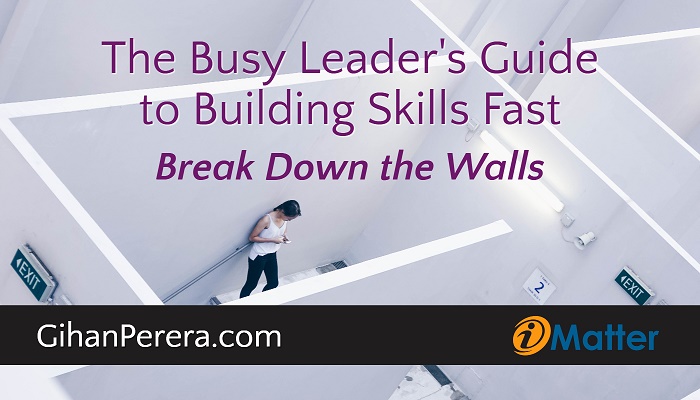 In a research study reported in the Harvard Business Review, chefs in a restaurant made tastier food when they could see their customers. This wasn’t because the chefs felt like they were being watched (because the same result occurred when the customers couldn’t see the chefs), but because they could see how their product would be used. Just seeing their customers gave them a more personal connection and a more meaningful role, and that translated into a better product.

Can you do the same with the people in your team? It’s not very inspiring if they beaver away in isolation, day after day, and never see the way the customers use what they produce. Look for ways to let them step outside their own little work bubble and see what’s going on around them.

Step into a co-worker’s shoes

As a leader, you can see how each person’s work fits into the overall project, but it’s not so easy for the people doing the work itself. Give them the chance to understand what other people in the organisation do, especially those directly connected to them. You can do this through informal job-swapping, letting them shadow somebody else for a day, or inviting co-workers to give a short presentation about their job.

For example, if you lead a sales team and rely on leads from the marketing team, invite a marketing person to make a short presentation to your team. Similarly, if you’re the marketing manager, send your people on sales calls with the salespeople who receive your leads. This process not only brings the two teams closely together, it also means they might identify ways to improve the process.

Show them some real customers

Bring your team members closer to customers, even just to observe them. According to one study from Harvard, chefs make tastier food when they can see their customers. This is not because the chefs feel like they are being watched (the same result occurred when the customers couldn’t see the chefs), but because they could see how their product would be used.

This is valuable even for people in a support role – such as finance, administration or human resources – so they can see how their work contributes to the value your organisation offers.

This helps people understand how their work is meaningful and lets smart people suggest improvements.

Show them how their work has meaning

If you can’t expose them to real customers, find other ways to demonstrate that their work has meaning, either to others in the organisation or to external stakeholders. People are motivated by knowing how their work plays a role in delivering an important service or creating a valuable product.

Highlight something to be proud of

If meaning is about their internal motivation to do a good job, pride is about something your organisation does that they can boast about to others.

Your organisation might be the biggest, smallest, oldest, youngest, fastest, brightest, or better in some other way. It might pride itself on its remuneration, working conditions, management structure, social conscience, mentoring programs, paid parental leave, or something similar.

Even if your team members aren’t working in areas directly related to these features, they can still take pride in being part of an organisation that supports them.

Sometimes the best way to encourage cooperation is to remove resources rather than adding them. For example, a lunch room that’s shared with other teams might spark more interesting conversations than a private lunch room for your team.

However, be careful of the unintended consequences of your actions. Removing the lunch room might encourage people to eat lunch at their desk instead – and that defeats the purpose (as well as reducing productivity).

People also tend to resent losing resources. Rather than actually taking resources away, you might apply this principle by simply not adding new resources.

An important part of your role as a leader is to bypass the hierarchy in order to get things done, but the organisational hierarchy can be useful if you use it to your advantage. Avoid the hierarchy if it causes friction (that’s called bureaucracy), but use it if it facilitates your goals.

For example, if the CEO has publicly stated her commitment to collaboration, you can quote her when asking your peers about job swapping, creating a mastermind group, or any other initiative you want to implement.

What are YOU doing to break down the walls for your team?

Don’t wait until “we’re not so busy” to put these ideas into action. There will never be a perfect time, so make time for these ideas in your regular work days. Most of them don’t take much extra effort, but they can make a big difference to your team’s motivation and engagement.